Brides Of Destruction - Runaway Brides (Without Nikki Sixx, But He Wrote Songs To The Album) 13 Track CD Digipack UK 2005 M 7169 2 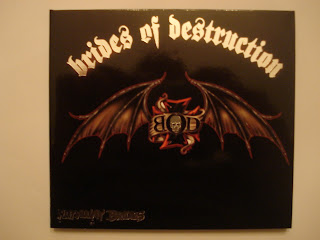 Brides of Destruction: London LeGrand (vocals); Tracii Guns (guitar); Scott S. Sorry (bass guitar); Scott Coogan (drums).Originally, the main attraction of the Brides of Destruction for many was Nikki Sixx getting back to good old-fashioned heavy metal. With Mötley Crüe on what appeared to be an indefinite hiatus, the Brides (or as they're known by fans, B.O.D.) seemed to be Sixx's new full-time gig. But with renewed interest in the Crüe thanks to their best-selling tell-all book, The Dirt, and the megabucks that a reunion tour would bring, Sixx returned to the Crüe after only a single B.O.D. album, 2004's Here Come the Brides. Instead of waiting for Sixx to return from his tour of duty with the Crüe, Tracii Guns and company decided to forge ahead without their former leader, issuing a follow-up in quick succession, 2005's Runaway Brides. The group has enlisted the aid of renowned producer Andy Johns (who has worked with such giants as Led Zeppelin and the Who...and Cinderella), who co-produces the disc with Guns. What you get is an album that follows the direction of the debut -- raw, in your face, guitar-riff rock, with lyrics that usually focus on the darker side of life, as evidenced by the Motörhead-esque "Dead Man's Ruin" and the Guns N' Roses-esque "White Trash." Although he's no longer in the band, Sixx offers some help in the songwriting department, as he co-penned several tracks prior to his departure ("Criminal," "This Time Around," and "Blown Away"). Also included is something that is sure to become a phenomenon in the world of hard rock/heavy metal -- a tribute to fallen guitar hero Dimebag Darrell, with the album-closing "Dimes in Heaven."
Upplagd av Motley Crue Head Sweden kl. fredag, januari 20, 2012